Book Review: And the Trees Crept in By Dawn Kurtagich 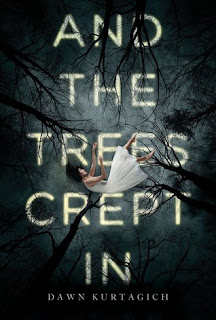 Goodreads Summary: When Silla and Nori arrive at their aunt's home, it's immediately clear that the "blood manor" is cursed. The creaking of the house and the stillness of the woods surrounding them would be enough of a sign, but there are secrets too--the questions that Silla can't ignore: Who is the beautiful boy that's appeared from the woods? Who is the man that her little sister sees, but no one else? And why does it seem that, ever since they arrived, the trees have been creeping closer?
Filled with just as many twists and turns as The Dead House, and with achingly beautiful, chilling language that delivers haunting scenes, AND THE TREES CREPT IN is the perfect follow-up novel for master horror writer Dawn Kurtagich.

I don't know what it was about this book that kept me reading it even though I was confused most of the time. The writing was good but for the majority of the story I was confused and had so many questions the further I got.

Silla and Nori arrive at their aunts home to get away from a horrible life they had in London with their parents. Their aunt, Catherine, lives in a manor called La Baume. They feel that this life will be better for them even though their mother hardly ever talks about the manor and their aunt. Catherine welcomes them with open arms and becomes what the girls need as a "mother figure" . For once Silla and Nori can live a normal life. After a while things start to change. Their aunt is getting paranoid of the girls going into the woods. She becomes distant and sometimes off. Sill start to realize that the house is haunted and that her aunt might not be as crazy she she was led to believe.

I did have a nice time reading this story. It was a good physiological thriller. It was haunting, suspenseful, and weird. I had so many questions the more I got into to the book! It had a slow start and with the questions I had it was frustrating. I especially had a lot of questions about Gowan. Who was he? How can he go back and forth through the woods and nothing bad happens? How come he is the only human present outside of Silla, Nori, and Catherine?

The writing was good. I think that is what made me push on with reading. It was written with diary entries so we could get a couple of glimpse inside Nori and Catherine's head.

The ending remedied the slow beginning and questions. I was about 50 pages toward the end and I was worried it wasn't going to end right. The ending was really good and it summed up everything perfectly. This is a good time reading a story like this with fall approaching and Halloween .

By Ericka October 20, 2016
(I received this ebook by the author in exchange for an honest review)
Goodreads summary: When Mary Beth McIntire settles into a vacation house on June 2, 2017, she anticipates a quiet morning with coffee. Then she hears a noise, peers out a window, and spots a man in 1950s attire standing in the backyard. She panics when the trespasser sees her and enters the house though a door to the basement. She questions her sanity when she cannot find him.

In the same house on March 21, 1959, Mark Ryan finds a letter. Written by the mansion’s original owner in 1900, the letter describes a basement chamber, mysterious crystals, and a formula for time travel. Driven by curiosity, Mark tests the formula twice. On his second trip to 2017, he encounters a beautiful stranger. He meets the woman in the window.

Within hours, Mary Beth and Mark share their secret with her sister and his brother and begin a journey that takes them from the present day to the age of sock hops, drive-ins, and jukeboxes. In CL…
Post a Comment
Read more

By Ericka June 07, 2019
Goodreads synopsis: London, 2019. Life has been easy for Maxim Trevelyan. With his good looks, aristocratic connections, and money, he’s never had to work and he’s rarely slept alone. But all that changes when tragedy strikes and Maxim inherits his family’s noble title, wealth, and estates, and all the responsibility that entails. It’s a role he’s not prepared for and one that he struggles to face.
But his biggest challenge is fighting his desire for an unexpected, enigmatic young woman who’s recently arrived in England, possessing little more than a dangerous and troublesome past.  Reticent, beautiful, and musically gifted, she’s an alluring mystery, and Maxim’s longing for her deepens into a passion that he’s never experienced and dares not name. Just who is Alessia Demachi? Can Maxim protect her from the malevolence that threatens her? And what will she do when she learns that he’s been hiding secrets of his own?I will admit I did have some kind of salty feelings going into this boo…
Post a Comment
Read more

By Ericka July 06, 2018
So for this month I did really good and read a total of 11 books! Two of those books were on my original TBR and the rest I picked up as a I saw. Normally on average I read about 4 or 5 a month but my reading has really been doing good. So here is all I read for the month of June.


Most of these were 4 stars. I read more contemporary than any genre. Home and Away is a book for School Library Journal so unfortunately I cannot share that review at this time. Have anyone of you guys read any of these topics?
Post a Comment
Read more